Reports and reactions to the [email protected] rally continued in the Armenian Blogosphere today. Onnik Krikorian at the CRD / TI blog was the only one to present a more neutral account of the events at the rally. The blogger reports that the “crowd was small”, and looks at the reaction from the crowd when the names of the Karabakh Committee were read out especially noting, that “the loudest cheers of all were reserved for his Minister of Interior, Vano Siradeghian, who had his parliamentary immunity lifted and was charged with masterminding several assassinations before apparently fleeing the country. He is still wanted by Interpol.”
CRD / TI blog pays special attention to Nikol Pashinian, one of the leaders of the movement. 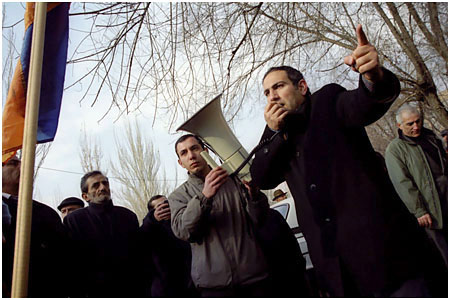 […]The main leader of the movement, however, appeared to be Nikol Pashinian, the young editor of the opposition Haykakan Zhamanak newspaper. Bearing an uncanny resemblance to Georgia’s Mikhail Saakashvili in both looks and temperament, Pashinian is an outspoken critic of the current Government.[…]

Speaking of [email protected] the ALS Movement welcomes the fact, that it is a non-partisan movement, however takes note of parties attending it: “both the controvercial HHSh (liberal-nationalist) and the Hndchaks (Marxist Social Democrats), which is in itself an interesting development.” The blogger at ALS Movement, kronstadt further explores the atmosphere of the rally, drawing parallels with his personal experiences of Artsakh Movement 19 years ago, and questioning the attempts of [email protected] to recapture “that sense and that momentum”. Kronstadt has many important questions about [email protected]:

[…]if they are a movement, then what is their philosophy? what is their ideology? which theoretical tradition do they adopt for analysing the past and cultivating the future? From browsing through their website I realise that they are generally meritocrats (each to his own abilities), which could work if the movement was actually initiating certain Empowerment programs for the peasants, cooperatives and unions on the ground. […]There is also this strange technocratic overtone to what they’re saying: there is still that central-source-of-all-authority in their rhetoric. […]

Aylentrank is not the Alternative ALS movement concludes.
The Armenian bloggers on the LJ, mostly blogging in Russian have put up a wide array of their memories of the days when HHSh was in power, uniformely identifying [email protected] as an attempt of HHSh to come back. Uzogh has put up a list of those posts under a joint title “So that everyone remembers”.
http://pigh.livejournal.com/9662.html
http://bigsauron.livejournal.com/199076.html
http://avitya.livejournal.com/389677.html
http://ogostos.livejournal.com/207710.html
http://bekaisa.livejournal.com/212969.html
http://dream-inspector.livejournal.com/114630.html
http://irukan.livejournal.com/371681.html
http://kornelij.livejournal.com/124952.html
Kornelij Glas also has a more controversial post, saying he doesn’t see any hope in the nearest future, blaming Robert Kocharian, Serge Sarkisyan, many others and the Armenian people in general. But, Kornelij says – the start of all this disgusting situation in the country was the result of HHSh policies and ideology, in which the symbiotic relationship of criminals and cynicists like Husik, Vano and “impotent intelligency” headed by Levon Ter-Petrosyan became the norm.
Christina on her turn criticizes the movement, saying she doesn’t see any guarantees in this movement, that when they come to power the same attitudes of ripping the country off won’t continue. More interestingly the blogger notes that this movement is also one of those “male only” movements, where the creative female component is absent.
Maybe that is the real reason why [email protected] was received with such hostility in the Blogosphere?