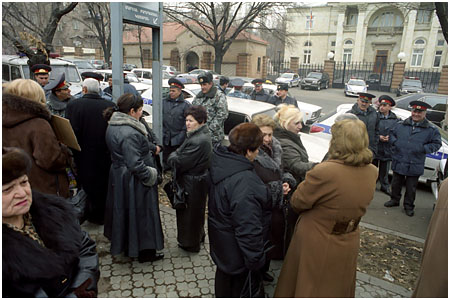 […]The CRD/TI Armenia Election Monitor reports on a protest against Armenia’s president that took place today outside of the presidential palace. The protesters are former residents of homes that the government evicted them from and for which the government paid less than market value.[…] Via Global Voices Online.

On a related note Bekaisa has a rebellious and inspiring post, an individual protest, looking at problems around the country, the protestors deprived of housing and left in the streets, poverty, corruption. “Generally speaking nobody gives a damn about the people from Buzand, Avan, Kond… They just don’t give a damn!” says the blogger and deems the society cynical, foul and unsympathetic, declaring a personal manifesto:

[…]I shall not be silenced, nor will I hide away, I am not afraid. internal emigration for me is humiliating, silence and lack of activity equivalent to crime.[…]