Home>Uncategoriezed>Boris Yeltsin has passed away 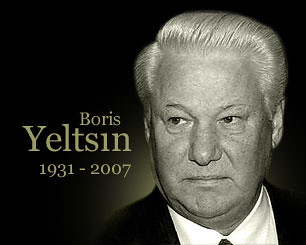 “We lost a great figure in modern political history” Nazarian says in his post, JLiving Notes analyzes the Yeltsin times refraining from expressing his attitude, but noting, that the point of view expressed by other bloggers about the fact, that the First President of Russia destroyed the Russian economy in 90’s is a blunt lie, and that the economy was destroyed already in Soviet Times, and says whoever came instead of Yeltsin (Gorbachov, Zyuganov, Yavlinskii, Zhirinovskii) the result would have probably been the same. “The man whom I owe my freedom has passed away”, Dilanyan comments in his LJ expressing his gratitude to the great man – Boris Yeltsin.
Photo newt1_obit_yeltsin from CNN.com, originally uploaded by nazarian.