At around 11:00 o’clock Mashtots avenue (the Prospect) was blocked in Yerevan in the area down from Pushkin str. crossroad to the Margaryan Polyclinic. The police and special service officers in civilian uniform refused to inform what is happening, telling to get out of there as quick as possible. The shopkeeper across the street said there’s been a bomb threat. Watching how relaxed the military uniform guys standing around the object, supposed to be the “bomb”, were you wouldn’t think there’s anything really serious. The police blocking the avenue were, however, quite serious and stern looking. 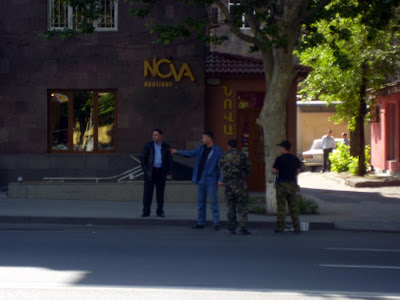 Police and special services disarm a bomb in Yerevan © Artur Papyan / The Armenian Observer Blog 2008
At any rate – my office is close by, so I’ll go over check again in 10-15 minutes.
UPDATE: by 11:45 the Prospect was re-opened. A1plus later reported (using my photos by the way), that it was indeed a bomb, which police and special services have successfully disarmed. The case is under investigation now.