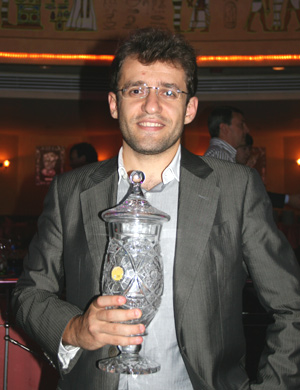 In what can be considered an excellent last round, Levon Aronian became the glorious winner of the 2nd FIDE Grand Prix Tournament in Sochi, Russia. And he did it in style, defeating Alexander Grischuk in a fine positional game. In a crazy game Radjabov beat Karjakin to finish clear second, followed by Wang Yue and Kamsky who share third place.
Levon Aronian (Armenian: Լևոն Արոնյան; born October 6, 1982) is an Armenian chess player. On the April 2008 FIDE list, he had an ELO rating of 2763, making him number six in the world and Armenia’s number one. He was born in Yerevan.
PS: Someone needs to update the Wikipedia entry about Aronian, to include the latest victory.