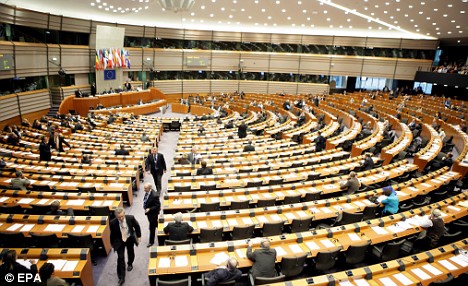 The European Parliament has banned the terms ‘Miss’ and ‘Mrs’ in case they offend female MEPs. The politically correct rules also mean a ban on Continental titles, such as Madame and Mademoiselle, Frau and Fraulein and Senora and Senorita.
Guidance issued in a new ‘Gender-Neutral Language’ pamphlet instead orders politicians to address female members by their full name only.
Officials have also ordered that ‘sportsmen’ be called ‘athletes’, ‘statesmen’ be referred to as ‘political leaders’ and even that ‘synthetic’ or ‘artificial’ be used instead of ‘man-made’.
The guidance lists banned terms for describing professions, including fireman, air hostess, headmaster, policeman, salesman, manageress, cinema usherette and male nurse.
However MEPs are still allowed to refer to ‘midwives’ as there is no accepted male version of the job description.
The booklet also admits that “no gender-neutral term has been successfully proposed” to replace ‘waiter’ and ‘waitress’, allowing parliamentarians to use these words in a restaurant or café.
It has been circulated by Harold Romer, the parliament’s secretary general, to the 785 MEPs working in Brussels and Strasbourg.
Struan Stevenson, a Scottish Conservative MEP described the guidelines as “political correctness gone mad.”