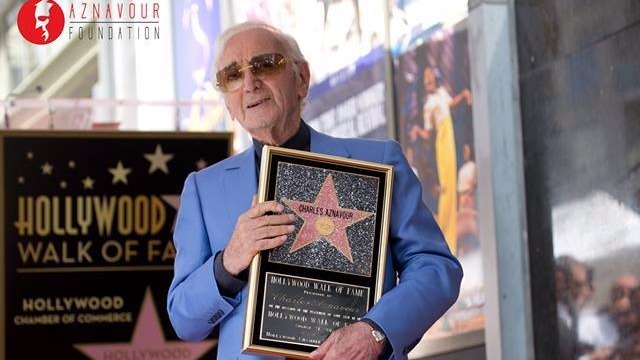 Our compatriot and great maestro Charles Aznavour got a Holywood star today.
“I am French and Armenian, to separate both is impossible like if you put the milk in coffee, you can’t separate them…” Aznavour said in his speech during his star opening ceremony. “And it’s fantastic to be able to have two different cultures working for you, if you want to do something. That’s what I did!”

Aznavour, 93, was born Shahnour Vaghinag Aznavourian (Armenian: Շահնուր Վաղինակ Ազնավուրեան on 22 May 1924) is a French, later naturalised Armenian singer, songwriter, actor, public activist and diplomat.
Aznavour is known for his unique tenor voice: clear and ringing in its upper reaches. He has written over 800 songs and recorded over 1,200, sung in eight languages and sold more than 180 million records. He is one of France’s most popular and enduring singers. He has been dubbed France’s Frank Sinatra, while music critic Stephen Holden has described Aznavour as “French pop deity.”
He is also arguably the most famous Armenian of his time.
In 1998, Aznavour was named Entertainer of the Century by CNN and users of Time Online from around the globe. He was recognized as the century’s outstanding performer, with nearly 18% of the total vote, edging out Elvis Presley and Bob Dylan.