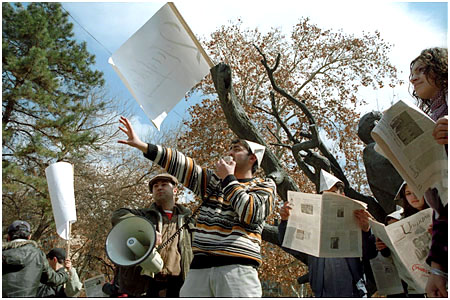 […]Standing at the corner of each intersection leading into the roundabout opposite Yerevan’s Opera House, as well as circling the grassy area in its center, each participant stood with a newspaper reading separate articles of their choice out aloud. Also wearing hats made out of newspapers, the sight and sound of that alone was surreal and unexpected enough for Armenia even in this day and age.
As were leaflets handed out asking “are you satisfied with yourself, or with the person next to you?,” “are you guilty?,” and “are you afraid, or don’t you care?”[…]