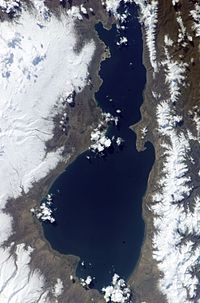 On August 21, 2008 the National Assembly of the Republic of Armenia adopted a government bill giving green light to increased water release from Lake Sevan. According to the original law 240 million cubic meters of water should have been taken from the lake to be used for electricity generating via Hrazdan Cascade and irrigation puposes. The new bill will allow the release of 360 million cubic meters of water.

The authorities are explaining the need for increased water outflow from Sevan with the short summer drought and low water availability in artificial water resrvoirs used for irrigation purposes. This is the first such increase for the past 8 years, since a law on the lake’s protection was adopted in 2001. Meanwhile environmentalists are protesting the measure and claiming, that “the government simply wants to salvage expensive houses and resorts located along Sevan’s coastline. Those properties have been at growing risk of being submerged by Sevan’s rising waters” as RFE/RL reports.

Before the heated debates in the parliament yesterday, the authorities had been preparing public opinion in favour of water release from the lake in the course of the past two-three weeks by showing news reports and footage of drained artificial reservoirs and dry gardens of Ararat valley. No news reports ever indicated the existence of concerns among environmental protection groups or independent scientists. Moreover, there were several rainfalls throughout the country within the past two weeks, which would seem to have alleviated the problem of water shortage, especially as most of the farmers have gathered the harvest by now and shouldn’t need as much water (as I have a small garden in the south of Yerevan, I know first-hand what I’m talking about here).

The Sevan Defense Initiative have disseminated a call to protest the government bill. “According to the opinion of independent scientists duplication of the
volume of released water from Lake Sevan is impermissible and dangerous
for the lake. Climate conditions during 2008 have not been as
unfavorable as to generate a need for a measure. While, the declared
increase of demand for irrigation water is not justified adequately” the call states.