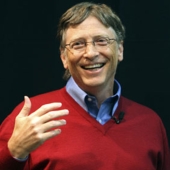 Forbes has published its annual list of World’s Richest people. Bill Gates lost $18 billion but regained his title as the world’s richest man. Warren Buffett, last year’s No. 1, saw his fortune decline $25 billion as shares of Berkshire Hathaway (nyse: BRK.A – news – people ) fell nearly 50% in 12 months, but he still managed to slip just one spot to No. 2. Mexican telecom titan Carlos Slim Helú also lost $25 billion and dropped one spot to No. 3.
The billionare we – Armenians care more about, Kirk Kerkorian is on the #98 spot, with his personal fortunes estimated at $5 billion.  One thing I noted is that ‘our’ billionare’s fortune is listed as ‘self made’. Sadly though, Mr Kirkorian’s fortune appears to have lost a lot of money last year – $9 billion, Forbes says, in MGM Mirage gambling giant. His net worth also dragged down by an ill-timed investment in Ford.
Generally speaking, it’s been a tough year for the richest people in the world. Last year there were 1,125 billionaires. This year there are just 793 people rich enough to make our list.
Russia became the epicenter of the world’s commodities bust, dropping 55 billionaires–two-thirds of its 2008 crop. Among them: Dmitry Pumpyansky, an industrialist from the resource-rich Ural mountain region, who lost $5 billion as shares of his pipe producer, TMK, sank 84%. Also gone is Vasily Anisimov, father of Moscow’s Paris Hilton, Anna Anisimova, who lost $3.2 billion as the value of his Metalloinvest Holding, one of Russia’s largest ore mining and processing firms, fell along with his real estate holdings.
The world’s richest are also a lot poorer. Their collective net worth is $2.4 trillion, down $2 trillion from a year ago. Their average net worth fell 23% to $3 billion. The last time the average was that low was in 2003. Don’t you feel sorry for them?