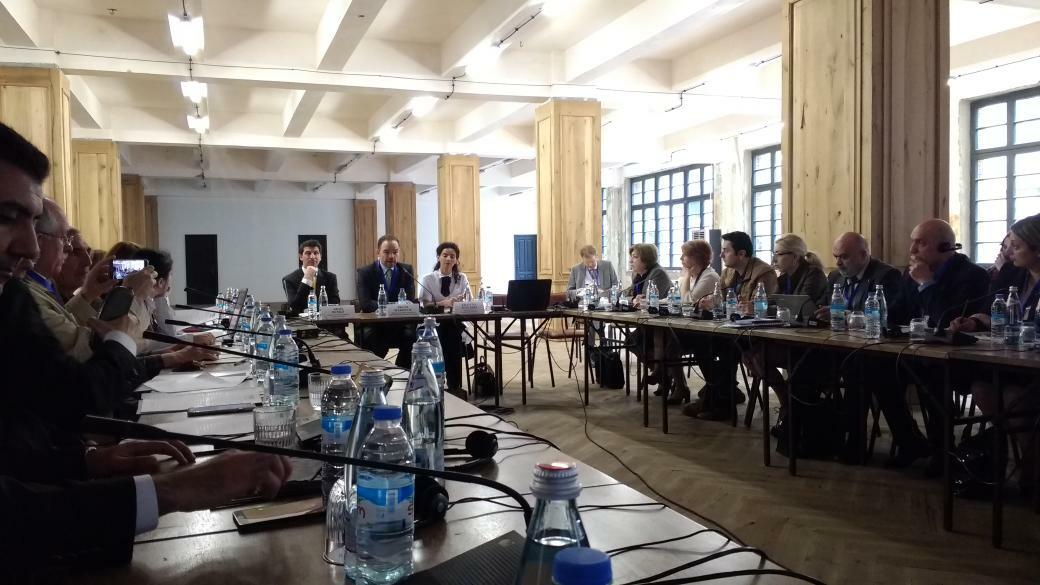 The passing year in Armenia was marked by civil unrest and major elections, which signal a transition of the country to a parliamentary system.

More than a dozen journalists, including Radio Free Europe / Radio Liberty reporter Karlen Aslanyan, present in this room, were attacked by the riot police and plain-clothes operatives on July 29th, when covering the anti-government protests held in support of armed members of a radical opposition group who seized a police compound in Yerevan.
Another one of my colleagues, Hovhannes Movsisyan, was pursued by a police-officer while covering the developments live.
Several journalists were hospitalized or had to seek medical help in the aftermath of those attacks.
The head of Yerevan police was fired and 17 other policemen were were suspended or reprimanded in connection with the attack, but we have yet to see any police officers being charged in connection with this.
In another troubling development, two journalists were attacked by government loyalists in Yerevan on April 2nd while covering Armenia’s parliamentary elections. Their cameras were taken away, one of them, RFE/RL correspondent Sisak Gabrielyan was physically assaulted. Weeks later the police identified and formally charged a man in connection with the attack. If found guilty, he would face up to 5 years in prison.
Another case of physical attack against a journalist carrying out professional duties happened in October 2016. Shoghik Galstyan, a reporter for “Araratnews” was attacked by a women at a polling station while covering local self-government elections in Vanadzor, her phone was broken and work was obstructed. Unlike the other cases, a trial has already concluded in this instance and the attacker was fined by around 1,500 US dollars, as well as barred from taking a public office.

Perhaps the most significant case of pressure against the freedom of speech in the country at the moment is the development around the publication by the Union of Informed Citizens phone recordings exposing involvement of more than 100 directors of public schools and kindergartens in illegal political campaigning on behalf of the ruling Republican party. About 30 of these directors have brought charges against the above-mentioned NGO seeking a formal apology and a total of 125,000 US dollars in damages.

These are, of course, only the most significant developments over the past year. In terms of their impact on the freedom of press in Armenia, it is important to understand that these represent the tip of the iceberg. We have to look at the things in a wider context.

Let’s face it, when the President of the United States, the would-be champion of the free world, attacks and abuses the press, it is incredibly hard for democracy campaigners and media organizations in our part of the world to keep a straight face.

And let’s face it, when the Brexit goes full-steam ahead, it is incredibly hard to make a case for western values and the need to align Armenia with the European Union.

In terms of the regional context, we have to consider the huge influence that Russia has in many aspects of Armenia’s political, economic and social life. Other regional powers are Turkey and Iran, which both are among the worst press offenders according to the Freedom House and Reporters Without Borders reports.

This gives the Armenian authorities a very convenient justification for literally everything. It is usually formulated in the following way – yes, we’re bad, but look at how bad the neighbors are! This works also in regards to Azerbaijan, which is behind Armenia in most of media freedom and democracy reports. And then there’s the Georgian variation — yes, they have better ratings, but see — they tried to pursue European integration and western values and lost Abkhazia and South Ossetia.

Not everything is bad of course, there are positive developments.

The initiation this year of the new agreement between Armenia and the European Union about deepening political and economic ties is one such positive.

The existence of a very vocal and vibrant civil society and media watchdogs in the country is another plus.

The fact that so far the Armenian authorities have demonstrated a certain degree of tolerance towards criticism (especially from the opposition) should be noted. The authorities are also quite flexible and willing to find workarounds when they are faced with civil protests for example — against the pension reform, energy price hikes and even, to some degree, protests in support of the armed gunmen, who seized the police compound.

Sadly, the threats faced by the free press in Armenia are not only external, but internal in nature.

One of the biggest problems is the fact that the Armenian Media Market is not a self-sufficient business. Most, if not all, media managers seek support from various sponsors. And the support comes with a price. The sponsors dictate their agenda, which is usually highly political.

Other major threats include the lack of high quality journalism education and investment in training and retraining opportunities for journalists. This results in a growing number of flops and mistakes by young and inexperienced journalists, which put the whole profession at a shame and serve as a justification for much of the bad treatment that journalists get nowadays.

Let me summarize by saying that as a whole we’ve seen a growing number of attacks against the free press in Armenia, which, given the overall negative global and regional context, do not seem very significant, but given the deeply rooted internal problems of the Armenian media, leave little room for optimism

PS: I prepared this text for a 10 minute speech delivered during the 14 South Caucasus Media Conference. The speech itself was somewhat different, because I tend to improvise, but the main points are the same.
Correction: the text has been modified, because originally I mistakenly wrote the following in connection with the events of Sari tagh: “The head of Yerevan police was fired and 17 other policemen were were suspended or reprimanded in connection with the attack. There were charges brought against several police officers at the end of March, but the criminal proceedings are yet to start.”