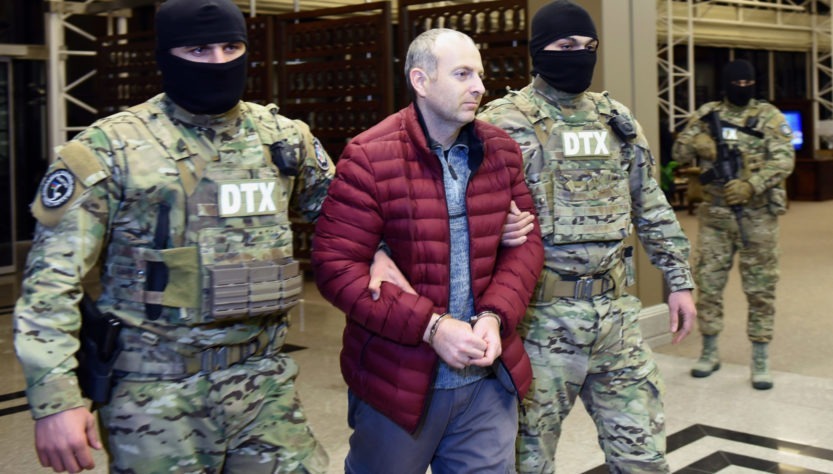 Azerbaijan’s grand experiment of scaring everyone with its blacklist and making the Russian-Israeli blogger Alexander Lapshin an example has failed spectacularly. All kudo’s go to Lapshin, of course. What a guy! But let’s start from the beginning, shall we?

Official Baku maintains a list of people declared personae non gratae in Azerbaijan, which includes several hundred non-Armenian foreign citizens who visited Karabakh without Baku’s permission. The list includes high level politicians and members of parliaments from various western countries and international organizations, artists, political scientists, journalists.
Azerbaijan considers entering the territory of Nagorno-Karabakh through Armenia (as it is usually the case) a violation of its visa and migration policy. “In case of necessity, appropriate legal actions will be taken with regard to these persons,” Azerbaijan’s Foreign Ministry has warned in the past.
As recently as yesterday the Azerbaijani Foreign Ministry called a recent visit to Nagorno-Karabakh by three U.S. lawmakers a “provocation” and said it had blacklisted them.

What exactly did Lapshin do?

Alexander Lapshin, a travel blogger, travelled to Karabakh via Armenia in 2011 and 2012. Lapshin, who has Israeli, Russian and Ukrainian citizenships, gave detailed accounts of those trips on his Russian-language travel blog. Some of those blog-posts were later deleted or unpublished from his blog.
After his visit Lapshin was placed on Baku’s blacklist. Nevertheless, he was able to travel to Azerbaijan in June 2016 and post a series of detailed blog entries on his visit. In particular, Lapshin suggested that the Azerbaijani authorities have squandered their massive oil revenues. “Despite 25 years of oil bonanza, the country is hardly different from neighboring Armenia and Georgia in terms of socioeconomic development,” he wrote.

The 40-year-old was detained in Belarus’s capital Minsk on an Azerbaijani arrest warrant. The Belarusian authorities extradited him to Azerbaijan in February, prompting strong criticism from Armenia and Russia.
The extradition was also condemned by international watchdogs such as Amnesty International and the Committee to Protect Journalists. Amnesty demanded the blogger’s immediate release, saying that he is “at risk of torture and other ill-treatment as well as an unfair trial.” The Azerbaijani government rejected the criticism.
On July 20, 2017 he was sentenced to three years in prison for visiting Nagorno-Karabakh. The court ruled that Lapshin illegally crossed Azerbaijan’s internationally recognized borders when he travelled to Karabakh via Armenia.

Last week Azerbaijan’s authorities announced that president Ilham Aliyev has decided to pardon the blogger after he tried to kill himself in Azerbaijani custody.
After his release the blogger denied those claims and said he was attacked in the Baku prison and barely survived it.

After his release the blogger wrote a Facebook status, reflecting on Karabakh.
“I am ashamed of admitting that before I found myself in the Azerbaijani prison I sincerely believed that the Karabakh conflict is a very disputed one and should be resolved on the basis of respect for Azerbaijan’s national borders,” he wrote. “What an idiot I was! Already in 1988 Azerbaijan began [a campaign of] terror against Armenians in [the Azerbaijani city of] Sumgait, Baku and Karabakh.”
“Armenians, hold firm!” he said. “These people want to see you dead full stop. And if you lose Karabakh as a result of negotiations or a weakening of Armenia’s position, be aware that they will come to slaughter you. Just like the Turks did 100 years ago.”

Why Alexander Lapshin is so important

When this whole story started, it looked like Azerbaijan is flexing its muscles, using the blogger as an illustrative example for anyone ‘daring’ to go against Baku’s rather absurd claims that any foreigner going to Karabakh should seek approval from them. I call this absurd, because if it were such an undisputed thing, there wouldn’t be a conflict and a resolution process.
Alexander Lapshin seemed an easy target to the official Baku. He is not an MP of a European country, he is not a journalist with a media company, which has lawyers, he is not a celebrity artist, whose arrest would solicit a global outcry.
And the whole institutional power of the oil rich, corrupt autocracy rose against the lone blogger. He did not stand a chance. He was extradited, sentenced, imprisoned and survived by sheer chance. The Azerbaijani authorities released him only because the death of the blogger in prison would be a huge scandal both with Russia, Israel and Ukraine.
After all he went through, one would suppose that Lapshin would keep quiet and not risk Baku’s ire again. But no. Lapshin spoke loud and clear on Karabakh right after his release. And by doing so he defeated the very reason Azerbaijan started this ugly campaign in the first place. Instead of scaring Lapshin and everyone else away from Karabakh, now Baku has got one angry and very brave blogger on its hands.
And regardless of what Lapshin says, or whether one supports his ideas or not, it is great to see freedom of speech win against oppression.
Once again, Lapshin, you’re an amazing, brave man! Accept my greatest respects!