Home>Armenia>After 10 years of silence Levon Ter-Petrossian spoke, only to say nothing? 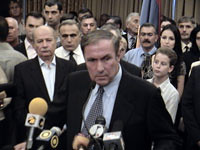 Following months and weeks and days of speculation on media and the blogosphere about the possibility of Armenia’s First President Levon Ter-Petrossian’s return to politics he appeared on Yerkir-Media news report on September 21st, the Independence Day to say, that he has not made up his mind yet. “Unless I know, that my steps will be effective, I won’t make the move” the ex-president said. According to Levon Ter-Petrossian, the country is in crises:

“Getting rid of the corruption system, resolution of Kharabakh conflict, putting an end to blockades, establishing of normal, mutually beneficial relations with neighbors, and which is more, the initiative should come from them. We must make the people understand, that by buying the votes for $20-50 from the people, the incumbent authorities are stealing the future of their children, the fate of this country”

Although the former president does not see any solution to Kharabakh problem anymore, the rest of the issues can be resolved by removing the current government, he thinks:

“It is the Kharabakh issue, which in the course of the past years our authorities have led to a hopeless situation. I do not know the way out of this situation”

“The only way to get rid of current government is by uniting all the political forces, all healthy social, intellectual, spiritual forces around one joint candidate”

While most of the traditional media are left pondering how to react to this news (bravo Yerkir-Media for being fast), bloggers didn’t take long:

LTP didn’t say anything, Uzogh says, posting a link to Regnum’s coverage of the news. Interestingly, Uzogh is perhaps the most active among the bloggers to cover the possibility of former president’s return, in posts here, here, here and here. His general position is clear:

I am not worried by the possibility (albeit rather shadowy at this point, but who knows?) of LTP’s running for president. In fact I’m glad. I think that there are a large number of myths going round in our society about him, which should be dismantled, when put into test and discussion on debates, rallies, publications. I consider LTP an ideal figure for the incumbent government and suspect, that they indirectly aid to his running for president.

Impeachment activist Aramazd, who has always been very supportive of the former president, is also glad, that LTP is coming back to politics, but I suspect his reasons are quite different from those of Uzogh.

Our Paskal-Rubo [i.e. Uzogh] is pretending, that he really wants Levon to run for president. But I already feel some people shaking their legs.. we’ll just have to live and see.

Raffi K. from Life in Armenia is openly laughing at the ex-president:

Former President Levon Ter-Petrossian broke his nearly decade-long silence Friday with an unusually harsh attack on the current authorities in Yerevan which he branded “criminal and corrupt” and accused of turning Armenia into a “third world country.”

This statement is only laughable because he was actually set the precedent for criminal and corrupt regimes in Armenia!

Onnik Krikoryan has an extensive post sharing photos and the real-life feeling at the HHSh event in Armenia Marriott Hotel yesterday, where Armenia’s first president made his remarkable speech. The post also looks at the media coverage of the event, along with Onnik’s comments and analyses:

He didn’t disappoint, it has to be said, and made his first public speech in nearly a decade although he stopped short of making any decision on whether to run against the prime minister, Serzh Sarkisian, in next year’s vote. Even so, the packed Tigran Metz ballroom in the Marriott Hotel greeted Ter Petrosian with rapturous applause and chants of “Levon, Levon, Levon…” He might not have made a decision yet, but the event seemed more like the launch of a presidential election campaign than not. 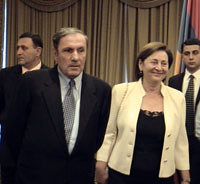 Reporter_Arm speaks in greater detail about the meeting, and, noting, that people like the well known businessman: Khachatur Sukiasyan were also present at the event, finds it noteworthy, that Ter-Petrosyan dedicated a part of his speech to the word “oligarch”, saying this term shouldn’t be used, and that “They are businessmen and pay taxes, perhaps even more then they should. But you know whose pocket these taxes flow into”. The blogger speculates, that at this point Ter-Petrosyan is sending a message to the oligarchs, that in case of his election, their interests will be protected.

A1plus is skeptical and thoughtful, drawing a picture of the sixteen-year-old Armenia, with driven-out inhabitants of the Buzand street “celebrating” the day in front of the presidential palace, while the latter holds a reception… Sudden speech of Levon Ter-Petrossian, and preparation of police and technical staff to evening concert and opening of the fountain in the central square.

I’ll just have to disagree with A1plus, saying the speech of LTP was not sudden – it was very well expected indeed, and I’ll disagree with Uzogh, who says LTP didn’t say anything: indeed, the man has just defined the whole agenda of the upcoming presidential elections! Corruption, Kharabakh, Foreign Policy priorities.

And didn’t anyone notice that well hidden PR move the ex-president made? By saying he will only run when he’s sure of his good chances, this highly deceitful politician, who gave start to corruption in this country, approved the first forged elections, and crushed the opposition in 96, alienated the Diaspora, formulated the lose-lose policy in Kharabakh issue, is now sending a message to the subconscious level of the voter by saying – ‘if I run, it means I’m the winner’, so prepare for that. I have to admit, that politics in Armenia has just become really-really interesting!