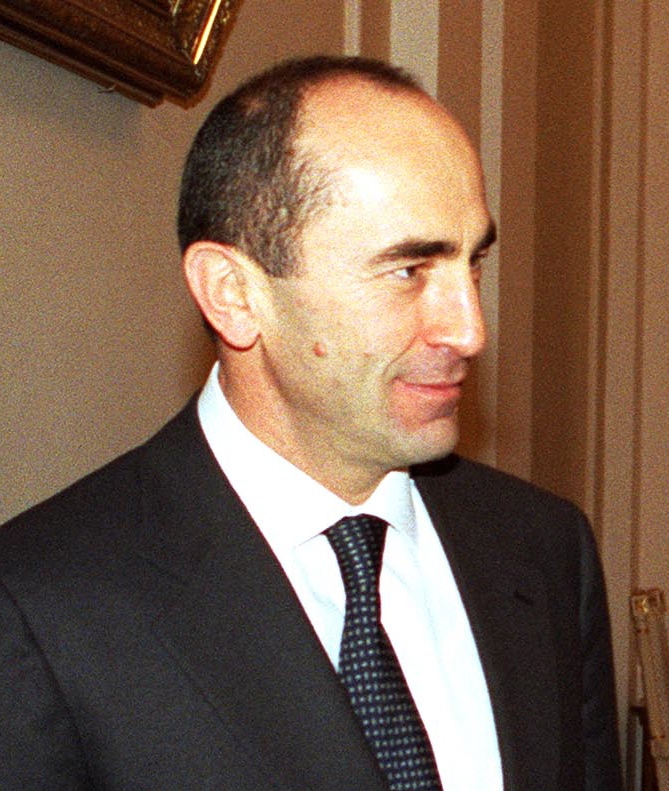 The interview of the President of Armenia Robert Kocharian with journalists from leading Armenian TV companies – Public TV, H2, Shant, Armenia was broadcast today – which was a major blow to the Presidential candidate, First President of Armenia Levon Ter-Petrossian’s authority with only two days to go before the Armenian voters head to the polling stations.
Speaking of the recent allegations by Ter-Petrossian, according to which Kocharian, Sargsyan and Oskanian have attempted to put into circulation a Karabakh resolution plan, which intended to give up Southern Armenian region of Meghry in exchange for Karabakh independence, Kocharian effectively denied all charges brought against him and Serzh Sargsyan by the First President, noting, that Meghry has a highly strategical importance for Armenia, as an access to the Iranian border, and reminding, that the gas pipelines built through Meghri, as well as government plans to build a hydropower station and oil refinary come as additional proof to his argument, that such a plan has never been officially discussed by the Official Yerevan, who have instead always worked towards strengthening the importance of Meghri region for the country.
In his accusation, Ter-Petrossian had also blamed the Kocharian/Sargsyan duo for masterminding the October 27, 1999 terrorist act in the Armenian parliament, connecting it with the failure to pass the above-mentioned plan to surrender Meghri. In response Kocharian reminded, that he had appointed Aram Sargsyan, brother of murdered Prime Minister Vazgen Sargsyan as the Prime Minister and had given him all the leverages for investigating the terrorist action. President Kocharian reminded, that Aram Sargsyan’s close friend – Boris Nazaryan was then appointed Prosecutor General, and Military Prosecutor Gagik Jahangiryan had been entrusted with the task of conducting the investigation. According to Kocharian, if anyone is the blame for not investigating the October 27 events properly – that should be Aram Sargsyan, then Prime Minister, who now is supporting Levon Ter-Petrossian.
Kocharian in his turn accused Levon Ter-Petrossian of hindering the efforts of Armenian forces to register greater progress in war with Azerbaijani forces back in 1993 and 1994. President Kocharian went further in his claims, portreying Ter-Petrossian as an undecisive President-Commander-in-Cheif, who did not have sufficiant beleif in victory. Kocharian allaged, that if Armenian armed forces headed by him and Sparapet Vazgen Sargsyan hadn’t countered such moods of President Ter-Petrossian, the Armenian side would have been the looser in Karabakh war.
At the end of the interview President Kocharian expressed once again his strong support for the Prime-Minister, Presidential candidate Serzh Sargsyan, noting, that only his election as President will make possible further progress in the country and improvement in the life of citizens, whearas in case of election of any other candidates there will be political standoff between the Praliamentary majority, who have control of government, and the newly elected President, who, having much less powers as a result of revisions to the Armenian Constitution in 2005, would find, that his campaign promises are impossible to implement. Needless to say, that despite there are no official studies of President Kocharian’s approval rate in the society, he seems to have a rather high rating – and this interview was undoubtedly a serious blow to Levon Ter-Petrossian’s campaign, which will possibly influence a great number of as yet undecided voters to make their choice against Levon Ter-Petrossian, if not in favor of Serzh Sargsyan.