Home>Armenia>Saakashvili's miscalculations and war in Ossetia 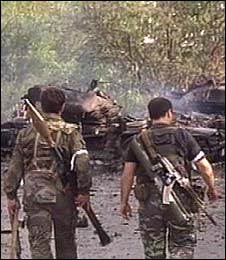 Georgia’s President Mikheil Saakashvili thought he had picked the perfect time to launch a massive attack against the peaceful population of its breakaway region of South Ossetia and Russian peacekeeping forces last night – the world would be preoccupied with the grand opening ceremony of the 2008 Olympic games in Beijing, he thought, who would care about the Georgian attempts at Genocide in it’s own territory, right? Need I remind everyone, that even in old Greece wars were halted for the duration of the Olympic games not to overshadow the sacred meaning of the grand tournament? Need I qualify Saakashvili’s ‘Blitz Krig’ immoral, to say the least? And will this dumb macho ever understand, that being the president of Georgia is serious business, not games? I mean – one has to be a complete idiot to think, that:

Now we have what we have – 1400 reported (unconfirmed) civilian deaths, 10 Russian peacekeepers killed and 30 wounded, heavy fighting on the territory of South Ossetia, Russian tanks and jets entering Georgian territory and according to Georgian claims bombing their military and civilian targets. There are no figures of losses from the Georgian side, but clearly, such an operation will cost them dearly. Saakashvili has already called back the Georgian contingent of 2000 from Iraq and has announced plans of declaring martial law and calling reserves to arms. A full scale war is looming and it doesn’t look like Georgia’s getting any help from anywhere. US President spoke of supporting Georgia’s territorial integrity – but will he dare to translate words into action, given the points I highlighted above? Hardly.
The UN Security Council met late last night only to reveal one more miscalculation of Mr. Saakashvili – with wourld leaders away in Beijing, away from their consultants and intelligence reports, the accusations of Georgian envoy were counterbalanced by the Russian envoy’s equally valid points and counteraccusations, so the Council broke on promise to meet again this morning, not that any results are to be expected anyway.
Meanwhile, we – Armenians have Azerbaijan to worry about – Ilham Aliyev might just decide to take advantage of general disorder in South Caucasus and attempt an attack on Nagorno Karabakh. Armenia’s defence Minister Seyran Ohanyan was in Artaskh yesterday – clearly not a simple sightseeing mission.