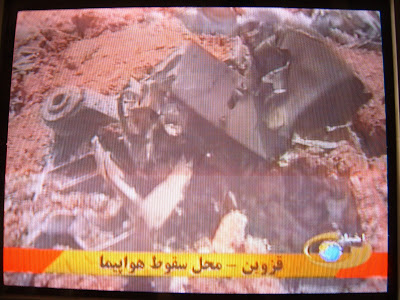 Armenian bloggers were taken aback as the Caspian Airline flight 7908 heading from Tehran to Yerevan, crashed 16 minutes after departing from Tehran’s Imam Khomeini Airport, killing all 153 passengers and 15 crew members.
The news was initially spread by Armenian twitterers and facebookers, Unzippedblog being the most informative of Twitter users on the tragic event.
Most comments on social networks and blog posts throughout the LiveJournal blogging community were limited todry facts.
Iranian Armenian blogger Vartan Davtian was the most informative of all – posting photos and Armenian language translations of Iranian state TV reports[AM].

The “Tupalov” airplane took off Tehran international airport and crashed 16 minutes later near Khazin area. […] Republic’s president Ahmadinejad just spoke, conveying condolences and demanding those responsible, to conduct detailed investigations and find out the reasons of the crash and report back as soon as possible.

On another post the blogger writes[AM] about an Armenian citizen – Harutyun Khalghatian, who was late for the flight.

Lchak has come up with links and updates to news on the plane crash, while journalist, blogger Mark Grigorian goes on to say: “Time to hand out all the Soviet planes as scrap metal, “ adding in the comment section:

Sadly, the soviet planes have worn out not only physically, but also morally. This particular machine, I guess, is a morally worn out one.

Unzippedblog twitters the question on everybody’s mind: “Why on earth #Iran still uses that ancient Russian plane TY-154! They should be banned. #armenia #yerevan” and posts an answer to it in a later tweet:

I’ve been told & BBC confirmes http://bit.ly/BpFW9 that poor air safety record in #Iran is due to sanctions imposed by US. #armenia #yerevan

Electra186 is one of those bloggers who are beyond themselves [RU] with terror and blaming the US embargo  for the crash:

God give piece to their soal… there were two kids. They say catastrophes are frequent in Iran, because of the embargo which doesn’t let them update the plane fleets and they mostly have TU’s and old American jets.

Bloggers are quick to find people who know or are somehow related to those who crashed in the plain. Words blog writes:

“There were two air-technitians in the plain who worked for the Caspian. I didn’t know them, but my mother and aunt worked with them.”

“Was in the airport today… it hurts…” reporting back from Yerevan’s airport, blogger and PanArmenian.net photojournalist 517design writes posting a an accompanying photo: