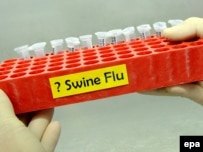 Armenia is taking wide-ranging precautions to prevent the spread of influenza A virus subtype H1N1 and I’ve just experienced those measures myself.The whole thing started on the plane, about 40 minutes before we got ready to land in Zvartnots.
A charming Czech stewardess handed out a sheet of paper, asking to fill it in.
“I don’t need this,” I said, thinking it is an immigration form. “I’m a citizen.”
“Everybody has to fill this in,” the girl explained, “it’s a requirement by the Armenian authorities as part of anti-swine-flu measures.”
The paper was asking for my sit on the plane (apparently to determine who else I might have come in contact with while on the plane), contact details and plans on where I’m going to stay in Armenia.
We landed soon. I was sneezing and coughing like crazy after two weeks of Prague-rain experience and sleepless nights at marvelous Czech pubs.
“Oh, well! They’ll definately take me in and hold for a couple of days, suspecting swine-flu,” I thought to myself and bravely walked out to passport control – to face my destiny.

Passengers flocked out to plane’s exit. Most were Armenians, some were Diasporans. There were the VIP meeting service girls (hot!), and a lady with a camera on a tripod.
“Spyurkahays,” I thought to myself, “Making videos of first unforgettable visit to motherland.”
“Actually, it’s not a bad idea,” I went on thinking. I always wanted to make photos and video’s of the new Terminal at Zvartnots.
Sneezing again as I took out my photo camera, I noticed the lady directing her camera at me. Right! I can smile and look charming for her, no problem. I opened my camera’s shutter.
“Hey you! Photos not allowed,” a commanding voice yelled.

“How come video’s are allowed for her, and photos – not allowed for me?” I yelled back with frustration.
The VIP girls snorted (boy, they are hot!).
The voice was patient, calm, explaining: “It’s a swine flu detection camera!”
“Oh, really?” I said, “Incidentally, I wanted to check, is all this sneezing of mine – a ‘swine flu’ thing?”
“Nope!” the lady with the camera said.
“Great!” I thought to myself. “Great to know it’s just regular rain-cold. And great to know they’re actually doing something about this bloody swine-flu thing. I’m a little bit surprised, actually.”
Meanwhile, H1N1 has been detected in Russia, Turkey, Georgia – so the darn thing is creeping to our region. And it’s growing throughout the world as well. Armenian authorities say they’ve got all the necessary precautions in place. For once, I’m willing to trust them.
UPDATE: On july 28th, 4 days after my arrival the Sanitary Control service of Gyumri called me and told me, that they will visit my house there as part of the anti-flu measures. They also warned me, that a doctor will visit me in my Yerevan house to check if I’m healthy. WOW!